On December 13, 2021, NetSPI was featured in an article written by Lisa Vaas for Threatpost. Read the full article below or online here.

What some call the worst cybersecurity catastrophe of the year – the Apache Log4j logging library exploit – has spun off 60 bigger mutations in less than a day, researchers said.

The internet has a fast-spreading, malignant cancer – otherwise known as the Apache Log4j logging library exploit – that’s been rapidly mutating and attracting swarms of attackers since it was publicly disclosed last week.

Most of the attacks focus on cryptocurrency mining done on victims’ dimes, as seen by Sophos, Microsoft and other security firms. However, attackers are actively trying to install far more dangerous malware on vulnerable systems as well.

According to Microsoft researchers, beyond coin-miners, they’ve also seen installations of Cobalt Strike, which attackers can use to steal passwords, creep further into compromised networks with lateral movement and exfiltrate data.

Also, it could get a lot worse. Cybersecurity researchers at Check Point warned on Monday that the evolution has already led to more than 60 bigger, brawnier mutations, all spawned in less than a day.

“Since Friday we witnessed what looks like an evolutionary repression, with new variations of the original exploit being introduced rapidly: over 60 in less than 24 hours,” they said.

The flaw, which is uber-easy to exploit, has been named Log4Shell. It’s resident in the ubiquitous Java logging library Apache Log4j and could allow unauthenticated remote code execution (RCE) and complete server takeover. It first turned up on sites that cater to users of the world’s favorite game, Minecraft, last Thursday, and was being exploited in the wild within hours of public disclosure.

Mutations May Enable Exploits to Slip Past Protections

On Monday, Check Point reported that Log4Shell’s new, malignant offspring can now be exploited “either over HTTP or HTTPS (the encrypted version of browsing),” they said.

The more ways to exploit the vulnerability, the more alternatives attackers have to slip past the new protections that have frantically been pumped out since Friday, Check Point said. “It means that one layer of protection is not enough, and only multilayered security postures would provide a resilient protection,” they wrote.

Because of the enormous attack surface it poses, some security experts are calling Log4Shell the biggest cybersecurity calamity of the year, putting it on par with the 2014 Shellshock family of security bugs that was exploited by botnets of compromised computers to perform distributed denial-of-service (DDoS) attacks and vulnerability scanning within hours of its initial disclosure.

Besides variations that can slip past protections, researchers are also seeing new tactics.

Luke Richards, Threat Intelligence Lead at AI cybersecurity firm Vectra, told Threatpost on Monday that initial exploit attempts were basic call backs, with the initial exploit attempt coming from TOR nodes. They mostly pointed back to “bingsearchlib[.]com,” with the exploit being passed into the User Agent or the Uniform Resource Identifier (URI) of the request.

But since the initial wave of exploit attempts, Vectra has tracked many changes in tactics by the threat actors who are leveraging the vulnerability. Notably, there’s been a shift in the commands being used, as the threat actors have begun obfuscating their requests.

“This originally included stuffing the User Agent or URI with a base64 string, which when decoded by the vulnerable system caused the host to download a malicious dropper from attacker infrastructure,” Richards explained in an email. Following this, the attackers started obfuscating the Java Naming and Directory Interface (JDNI) string itself, by taking advantage of other translation features of the JDNI process.

He offered these examples:

…All of which achieve the same objective: “to download a malicious class file and drop it onto the target system, or to leak credentials of cloud-based systems,” Richards said.

Bug Has Been Targeted All Month

Attackers have been buzzing around the Log4Shell vulnerability since at least Dec. 1, it turns out, and as soon as CVE-2021-44228 was publicly disclosed late last week, attackers began to swarm around honeypots.

On Sunday, Sophos researchers said that they’d “already detected hundreds of thousands of attempts since December 9 to remotely execute code using this vulnerability,” noting that log searches by other organizations (including Cloudflare) suggest that the vulnerability may have been openly exploited for weeks.

“Earliest evidence we’ve found so far of #Log4J exploit is 2021-12-01 04:36:50 UTC,” Cloudflare CEO Matthew Prince tweeted on Saturday. “That suggests it was in the wild at least nine days before publicly disclosed. However, don’t see evidence of mass exploitation until after public disclosure.”

On Sunday, Cisco Talos chimed in with a similar timeframe: It first saw attacker activity related to CVE-2021-44228 starting on Dec. 2. “It is recommended that organizations expand their hunt for scanning and exploit activity to this date,” it advised.

Exploits Attempted on 40% of Corporate Networks

Check Point said on Monday that it’s thwarted more than 845,000 exploit attempts, with more than 46 percent of those attempts made by known, malicious groups. In fact, Check Point warned that it’s seen more than 100 attempts to exploit the vulnerability per minute.

As of 9 a.m. ET on Monday, its researchers had seen exploits attempted on more than 40 percent of corporate networks globally.

The map below illustrates the top targeted geographies. 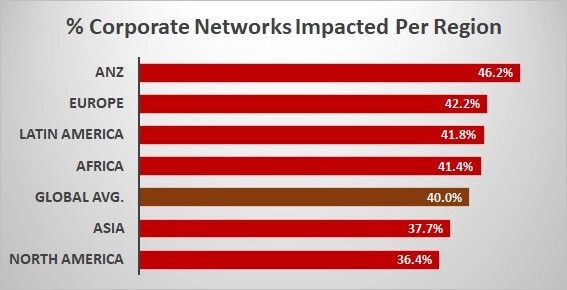 Hyperbole isn’t an issue with this flaw. Security experts are rating it as one of the worst vulnerabilities of 2021, if not the tip-top most terrible. Dor Dali, Director of Information Security at Vulcan Cyber, classes it in the top-three worst flaws of the year: “It wouldn’t be a stretch to say that every enterprise organization uses Java, and Log4j is one of the most-popular logging frameworks for Java,” Dali noted via email on Monday. “Connecting the dots, the impact of this vulnerability has the reach and potential to be substantial if mitigation efforts aren’t taken right away.”

As has been repeatedly stressed since its initial public disclosure, the Log4j vulnerability “is relatively easy to exploit, and we’ve already seen verifiable reports that bad actors are actively running campaigns against some of the largest companies in the world,” Dali reiterated. “Hopefully every organization running Java has the ability to secure, configure and manage it. If Java is being used in production systems IT security teams must prioritize the risk and mitigation campaigns and follow remediation guidelines from the Apache Log4j project as soon as possible.”

This situation is rapidly evolving, so keep an eye out for additional news. Below are some of the related pieces we’ve seen, along with some of the new protections and detection tools.

As of Monday, the internet was still in meltdown drippy mode, with an ever-growing, crowd-sourced list hosted on GitHub that only scratches the surface of the millions of applications and manufacturers that use log4j for logging. The list indicates whether they’re affected by Log4Shell and provides links to evidence if they are.

Spoiler alert: Most are, including:

A Deep Dive and Other Resources